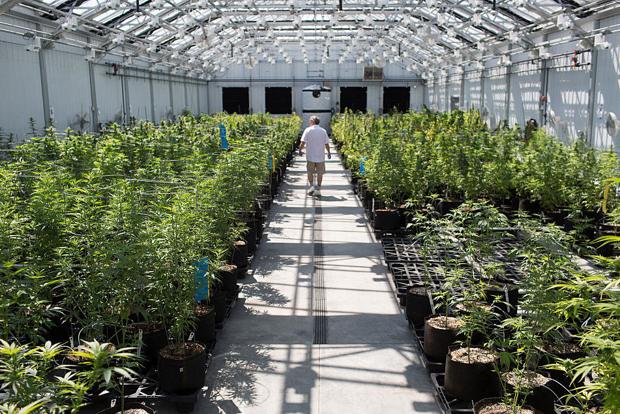 Minnesota Medical Solutions employee Guy Lindblom walked through a greenhouse filled with plants at one of the state’s two manufacturers of medical marijuana, May 5, 2015 in Otsego.

Listen to Minnesota Public Radio in Winona at 101.9 FM.

It may be the best guarded greenhouse in Minnesota.

The Minnesota Medical Solutions operation in Otsego, about 40 minutes northwest of downtown Minneapolis, is growing marijuana — legally. One of two manufacturers picked by the state to produce medical cannabis, the company is readying for July 1, when it will be legal to sell the product in pill or oil form.

Security, though, is at a premium. The federal government still considers marijuana growing illegal. As officials walked reporters through the plant on Tuesday, they left no doubt they’re serious about keeping the operation safe.

The building is tucked out of sight and surrounded by a fence topped with barbed wire. Ron Owens, who once worked for the United States Secret Service and is in charge of the plant’s security, calls it “casino-grade.”

“We are armed continually with security 24-7 on site,” he said. “We have constant surveillance on not only just our facility, but our dispensaries as well.”

Inside, there are rows and rows of marijuana plants, from clippings taking root to huge, palm-sized buds growing on shoulder-high stalks.

“For the medicine that we’re making, the start of the cannabis plant is the cutting and cloning process,” Minnesota Medical Solutions CEO Dr. Kyle Kingsley said as he walked through the operation of 4,000 plants.

“If you look at these small plants here, they’ve been cut from a larger mother plant, before the mother plant gets moved into the flowering area,” he said. “You can see this is where all of our plants start.”

The cuttings spend a few weeks there, growing roots. They move into hydroponic trays, and then get transplanted into larger pots.

They’re exposed to light around the clock at this stage to make the plants grow as big as possible, Kingsley said. After that, they’re moved into huge greenhouses.

The buds have the active ingredients. They’re harvested and run through a rack of tubes and pipes, using what’s called “supercritical CO2 extraction.” It’s super high pressure carbon dioxide that separates the chemicals in the plants.

Medical marijuana providers are after two of them: THC, the ingredient that makes people high. CBD, or cannabidiol, is the other.

“THC is going to be very helpful for people with cachexia, or wasting. People with decreased appetite. People at the end of life,” Kingsley said. “Somebody with pancreatic cancer can go from not eating for weeks to eating a meal a day.”

The CBD is best known for its use in easing seizures in kids, he added.

Those compounds are made into pills, oils and sprays, depending on the preference of patients. The drugs are stored in a giant concrete bank-like vault, before being distributed to dispensaries, where patients or their families can pick them up.

Minnesota Medical Solutions’ first dispensary is set to open in downtown Minneapolis on July 1. Another will open in Rochester two weeks later, and two more in Eden Prairie and Moorhead in August.

Another company, LeafLine Labs, has a facility in Cottage Grove and is expected to open dispensaries in Eagan and St. Cloud in July. St. Paul and Hibbing locations are scheduled to follow.

“It’s given us the first hope we’ve had in a really, really long time,” said Kim Kelsey, an advocate for legalizing medical cannabis who was also on the tour Monday getting a first look at the facility.

The Excelsior woman wants it to help her 23-year-old son who suffers from life threatening seizures. She doesn’t know what benefit it will offer her son and says it’s unlikely to end his need for conventional anti-seizure medication. But she wants to try.

“Yes, we want a miracle,” she said. “Who doesn’t when you have a sick child or deal with this for so long? But somebody, everybody, in the state of Minnesota will know somebody or be related to somebody that will be able to benefit.”

OCGreenRelief
Our website provides our patients with information on our various strains and educates each individual with current medical marijuana facts and laws.
Related Posts
Oakland activist to turn over marijuana businesses after raid

ONDCP ADMITS GROWING BY MEXICAN “CARTELS” IN CALIFORNIA A MYTH

Finally, the Drug Czar's office has acknowledged that the "cartel" narrative is a myth devised…

Watch How THC In Cannabis DESTROYS Cancer Cells Under A Microscope

“THC slowed the growth of lung cancers, breast cancers and a virus-induced leukemia in laboratory…